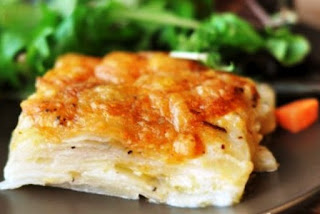 Preheat the oven to 350 degrees and adjust an oven rack to the middle position.

In a large bowl, toss the cheeses and cornstarch together until evenly coated.

In a large gratin dish (about a 2- to 3-quart dish), shingle half of the potatoes.

Sprinkle the potatoes evenly with 1½ cups of the cheese mixture, ½ teaspoon salt, and ¼
teaspoon pepper.

Top with the remaining potatoes, shingling them neatly and evenly.

Sprinkle another ½ teaspoon salt and ¼ teaspoon pepper evenly over the top.

Combine the cream and the broth in a large measuring cup and pour the mixture over the
potatoes.

Top with the remaining cheese mixture and bake until golden brown and a fork inserted into the
center slides in easily with little resistance, 75 to 85 minutes.

Let the potatoes cool for 10 minutes.

You can combine this amazing recipe with some others from our collection.

Recipe from:  navywifecook Image credit:  Mercedes Cheesy Bacon Chicken Casserole “I used shredded rotisserie chicken (as I do for ...