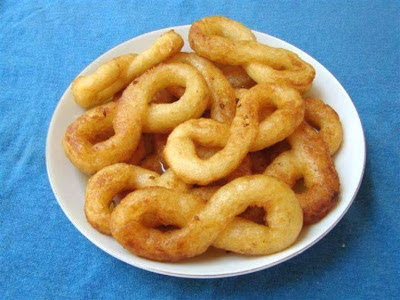 This is one of the most traditional desserts in Cuba, but it is known too in many more countries.

Boil cassava, dasheens and sweet potato, until tender, about 5 to 10 minutes.

Remove from heat and allow cooling.

With a mortar crush or grind smash to puree.

Boil cinnamon, vanilla and anise with a little water and set aside.

In an small bowl beat the eggs.

Put the puree on the kitchen counter, make a well in the middle and add the two beaten eggs,
flour, a pinch of salt and the mix of anise, vanilla and cinnamon

Deep frying, remove and serve with syrup (prepared with sugar in a pint of water and the juice of half a lemon) or cover with any other kind of syrup.